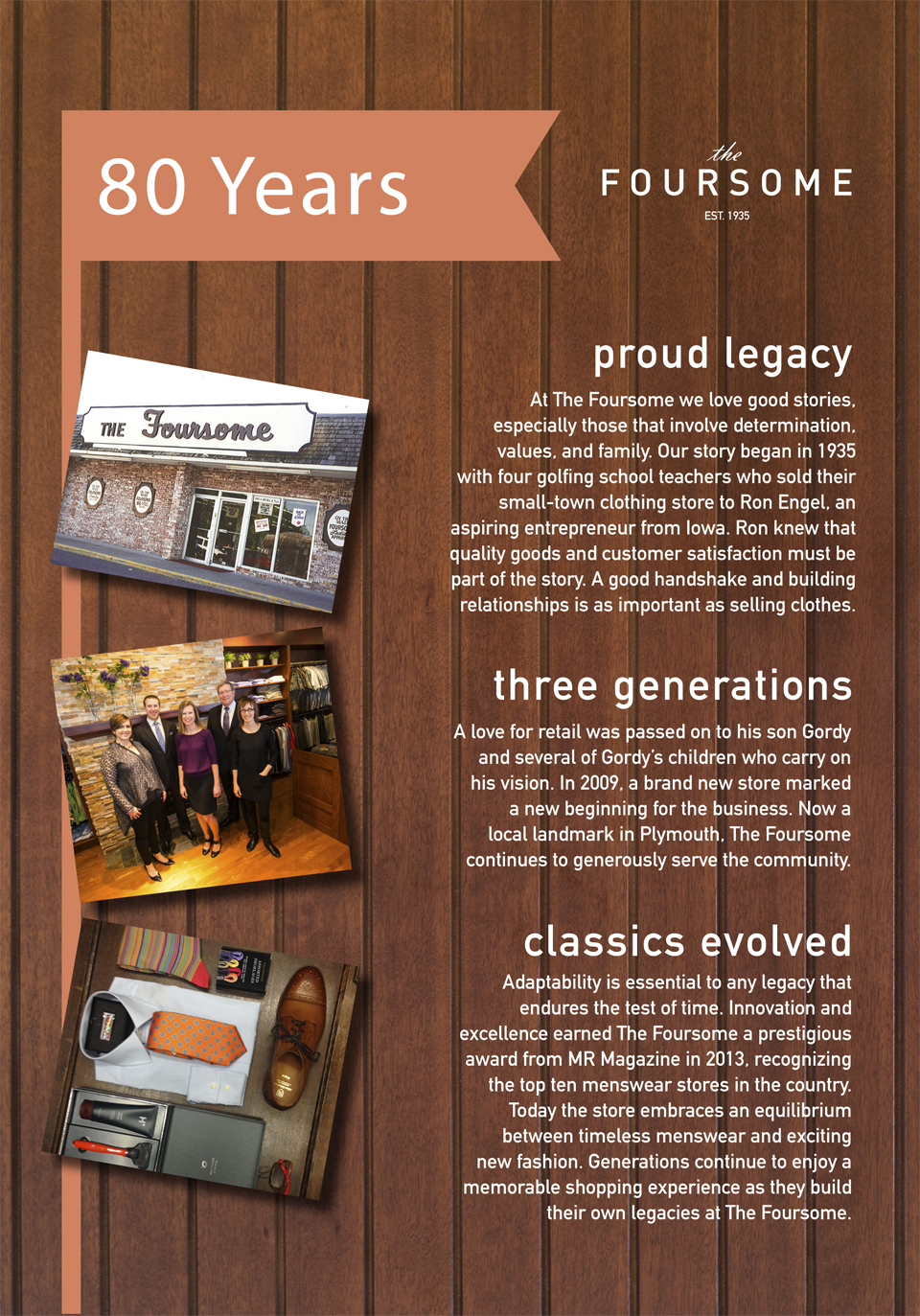 The Foursome was founded in 1935.  It began as a small general clothing store located on Lake Street in Wayzata, Minnesota, a small city 12 miles west of downtown Minneapolis.  The store was founded by four golf playing school teachers who named their business "The Foursome", in conjunction with their favorite past time. In 1952, the business moved into larger quarters in a remodeled grocery store at the intersection of Highways 12 and 101 in Wayzata.

In 1955, Ron Engel and his wife Lucille moved from Waterloo Iowa to become part-owners of The Foursome.  The business took on a true family flavor, with Ron selling and Lucille doing bookkeeping and alterations.  In 1965, Ron and Lucille became sole owners of The Foursome.  In 1969, after graduating from Gustavus Adolphus College, Ron and Lucille's son Gordy joined the family business and currently serves as the company's president. Gordy’s daughters Nicole Chose and Keri Roueni, also Gustavus graduates (1997 & 1999), have signed on as Marketing Director and HR Manager, making it a three generation operation. In 2011, Gordy’s son Michael Engel also joined the family business in the role of finance and buyer. Michael's wife Kelsey and another Engel sister Beth also work part time in the areas of merchandising and design.

In 1967 the business moved once more to a new enclosed mall in Wayzata, the Bay Center.  Over the next several years the business began to expand with the addition of separate family stores.  A Family Shoe Store was opened in 1970.  In 1978, a Big & Tall Men's Store was opened, filling a void in the local clothing market for this segment of customers.  In 1983, The Foursome Children's Store opened, carrying merchandise for infants through pre-teen children.  In 1985, the addition of the Ladies Store completed the "Family Clothing and Shoes".

For over 20 years, The Foursome carried on these five separate stores, Men's, Ladies, Children's, Big & Tall Men's and Family Shoes which occupied over 30,000 square feet in the Wayzata Bay Center.  In late 2007, the decision was made to concentrate on and enhance the business’ core strength of men’s and big & tall clothing and shoes, and close the women’s and children’s stores. Also during this uncertain time, an extensive redevelopment of the Wayzata Bay Center was finally approved in 2008, after several failed attempts and previous plans. Due to many delays in the proposed projects, The Foursome was forced to seek a more immediate alternative. The decision was made to move the business to a brand new building in neighboring Plymouth.

On November 14, 2009, The Foursome opened their new store in Plymouth, MN, one block north of Hwy 55 on Vicksburg Lane. The updated Foursome clothing and shoe store is now consolidated under one roof, offering fine apparel and footwear for men, including big & tall men's sizes. They continue to provide services like tuxedo rental, outside tailoring, and a custom clothing department.

The Foursome name has become synonymous with quality merchandise, large selections, and exceptional service. Over the years, the business has grown and kept pace with the changing times and the challenges of surviving as a single location, family-owned specialty store.

The Foursome is recognized as one of the finest clothing retailers, not only in the Minneapolis area, but across the country.

Read our complete history as compiled by the Wayzata Historical Society in this 2023 article, The Incomparable Foursome

Create an account with us and you'll be able to:

Fill in your email below to request a new password. An email will be sent to the address below containing a link to verify your email address.